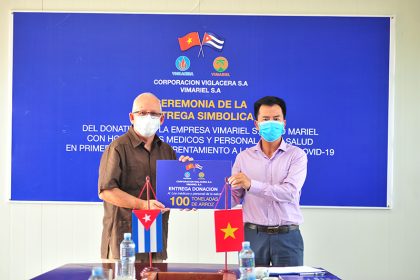 Viglacera donated 100 tons of rice to doctors at the frontline against the COVID-19 acute respiratory infection of Cuba and 25 tons of rice to the SANVIG Construction joint venture. 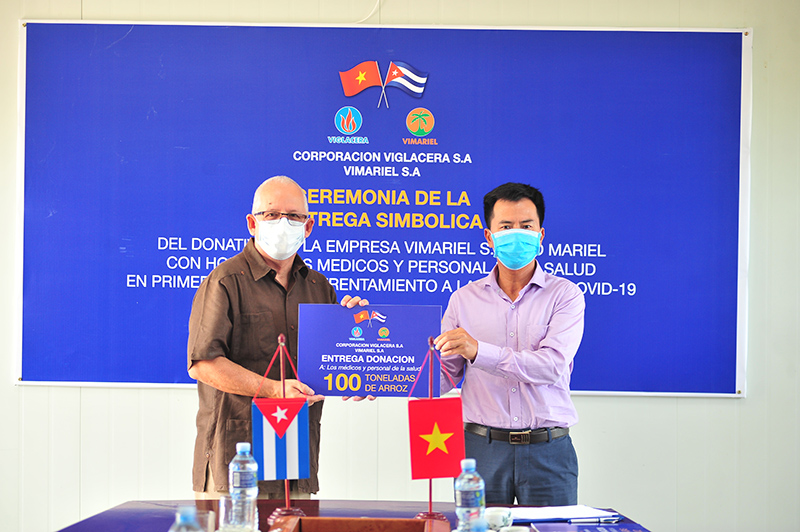 According to the Vietnam News Agency reporter in La Habana, on October 7, the representative of Viglacera Corporation of Vietnam in Cuba held a symbolic ceremony of giving gifts of 100 tons of rice to doctors at the front line to fight against COVID-19 acute respiratory infection disease of Cuba and 25 tons of rice for SANVIG joint venture, which is manufacturing tile, flooring and sanitary ware.

Speaking at the ceremony taking place at the Mariel Special Development Zone, Mr. Nguyen Ngoc Anh, Vice President of ViMariel Company, Viglacera’s branch in Cuba expressed his admiration for the spirit and indomitable struggle of the Cuban people, as well as his expectation to contribute a small part to share the difficulties with the heroic Caribbean island nation.

Cuba-Vietnam honors cooperation in the fight against COVID-19

On the Cuban side, Deputy Minister of Health, Mr. Luis Fernando Navarro Martínez affirmed that Cuba always treasures the affection and friendly gestures from the Party, State and people of Vietnam, vividly demonstrating the saying “with Vietnamese people, solidarity and friendship with Cuba is an imperative of the heart and mind ” by Prime Minister Nguyen Xuan Phuc.

Mr. Navarro Martínez emphasized the steps to tighten the traditional cooperation and affection between the two countries in the context that the COVID-19 epidemic is causing many difficulties around the world, it is even of more practical significance in the year the Vietnam and Cuba celebrates the 60th anniversary of diplomatic relations; at the same time, he said that the gift would be immediately distributed to Cuban medical facilities.

Also, at the ceremony, Vietnamese Ambassador to Cuba Mr. Le Thanh Tung reaffirmed the enduring values of the special relationship between the two countries through different stages of struggle by each nation, at the same time he strongly believed that the success of joint venture projects on production and investment would strengthen and enrich the traditional solidarity between the two peoples.

Viglacera Group is implementing 2 projects in Cuba, of which ViMariel is the first 100% foreign-owned enterprise to be granted the right to use land and develop industrial infrastructure in Mariel Special Development Zone – a priority point to receiving investment and promoting Cuban import and export; and SANVIG joint venture is one of the leading sanitary ware and tile suppliers in Cuba.